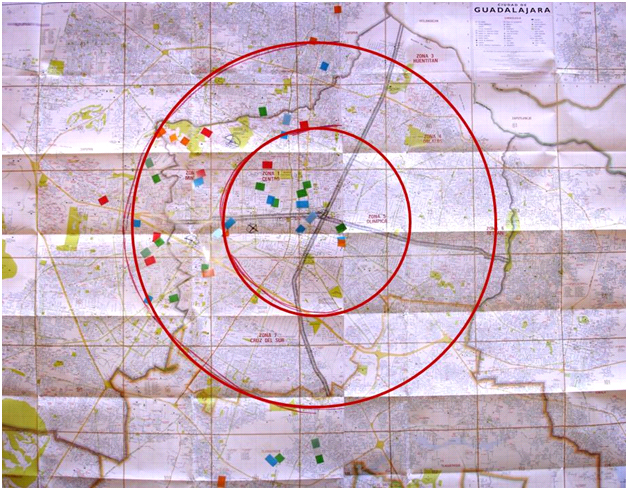 As part of our course at the Escuela Superior de Arquitecura (ESARQ, hosted by Dra. Maria Elena De La Torre), we staged a mapping exerciseÂ for studentsÂ in theÂ Diplomado in Paisajismo whichÂ revealed a fundamental challenge to the sustainable growth of Guadalajara: the slow migration of families out of the city core. When asked to mark where they, their parents and their grandparents lived, an indicative pattern emerged (see Figure). Despite this being the location of the school, the cityâ€™s central zone was populated by the most grandparents of the students, followed by parents, with few students themselves living there. In the suburban zone the pattern reversed, with more students, fewer parents and the fewest grandparents. In the most distant peripheral zone there were no parents or grandparents at all, only a younger generation of suburban commuters.

The migration out of the city centre and into the suburbs became clear. As our lives have become increasingly sedentary, we have also shifted our smaller families further away from the city in larger homes that use more energy, requiring longer car drives driven by increasingly larger vehicles that drink up more petroleum that we buy at subsidized prices at MX$9.03/L ( in Guatemala gasoline costs MX$10.50, in Chile MX$11.60/L , Brazil MX$15.39, and Peru MX$17.34/L[1]). ESARQ students also mapped out the locations of basic services, shops, offices, grocery stores, parks, bus stops, a diverse range in housing types, and other integral elements of a more complete community inÂ the inner-city, gentrified Chapultapec neighbourhood where the school is located. Students considered what similarities and differences existed between their gentrified urban surroundings and the isolated, suburban neighbourhoods where they lived.Â Few of theseÂ indicators of complete communities canÂ thriveÂ in such low-density suburban expanses, often forcing residents to drive or stay at home.

In recognition of our countryâ€™s growing health problem, the Mexican government recently mandated 30 minutes of exercise for children in school each day, an excellent start, but there are other ways to curb this sedentary lifestyle that will also help ready us for other coming challenges we face in Mexico. The growth in our countryâ€™s middle class compounds these trends, and a resulting explosive growth in our consumption of petroleum. Production in our countryâ€™s largest oil field peaked shortly after 2000 and has been steadily declining ever since, ensuring the rapid onset of our need to import petroleum from other countries. Fallout from this includes the reality of climate change, a reality which has raised water levels in Puerta Vallarta some 17 cm in the last 100 years, and is expected to double this in half the time (a not-so-distant future where most of our readers will still be alive). We can see by those numbers that climate change is a slow train to start but that pace is accelerating exponentially. While we will have wet feet on the coast, weâ€™ll be parched inland, for in tandem with sea level rise is perhaps a more severe impact: less fresh water. Although controversial for some time (though largely only based on political grounds and corporate lobbying), the global community has been measuring some of these impacts with its own bare hands, and has come to accept them as a reality and begun dedicating investment into adaptation strategies.

Whether it is petroleum (or electricity to power all those electric cars, part of our utopic dream that will save us from having to buy oil from Saudi Arabia at globally competitive prices), drinking water (whether its due to climate change, or because Guadalajaraâ€™s pipes are too old to safely drink from as is currently the case), food (we import 1/4th of the corn that we consume, and the world seems to want to shift more of it towards producing ethanol-blended petroleum), there is increasing need to re-establish local control over our own resources. This capacidad de recuperacion, or resilience, must motivate the design of our cities, the land-use of our countrysides, and the transportation networks of our states.

Although theÂ long listÂ of challenges feels overwhelming, there is a silver bullet: urban planning. A concept that in Mexico has come be the subject of jokes, it is one that we must transition into just as the Mexican economy transitions out of the third world, and into the first. Although it is comforting to hope that solutions might come from elsewhere, and along with it, the money to implement them, few other countries in the world are willing to spend international development money to fix Mexicoâ€™s problems. As long as some of the richest people in the world are carrying Mexican passports, we Mexicans ourselves will be left to deal with our development problems out of our own wallets.

Elements of a more sustainable development trajectory once thought only possible in countries like Sweden, Denmark and Germany, and in cities like Vancouver or Portland, are now showing up in places far closer to home. Fast, accessible public transportation networks in Curitiba, Brazil and BogotÃ¡, Columbia demonstrate just how far we could look to push the macro-bus system of Guadalajara, which must now be integrated into a larger, more integrated transportation plan that includes walking and biking and the train line. In Ecuador, Bahia de Caraquezâ€™s reformation as an eco-city following two natural disasters has drawn international recognition, and Barcelona, Spain has long since demonstrate the utility and marketability of more walkable, mixed-use communities like what Guadalajara is beginning to see in the neighbourhood of Chapultapec. Chapultapec is Â an example of aÂ diverse city centre that can be replicated to provide more balanced flows of people, goods and services to relieve our streets of the traffic congestion that lead to the construction of the Puente Atirontado (a solution similar to that which Bogata was originally considering as well, at 10x the cost of implementing itsÂ alternative system of high-speed bus routes between dense urban centres and peripheral connectors).Â A different cultureÂ of decision-making can be seen with the City of Guadalajaraâ€™s car-free via recreativa Sundays, the trendy cyclists in the Americana district, and a generation of entrepreneurs following the examples of other European cities in the creation of the “Bikla”Â bicycle service network to connect together popular urban destinations. These can serve asÂ elements ofÂ a larger, more sustainable city system, but only if smart urban design and planning is employed to support it.

Other elements such asÂ alternatives to colonias en coto (in other words behind walls, a tragic, unintelligent design element that is part of the slow suburban death of Guadalajara) exist to provide safety and security. All of these serve to relieve many of the problems wrought by status quo development described above, and this area of Guadalajara serves as the baseline for other more sustainable urban centres. Although further improvements can be made to improve its grade in sustainability, fostering a distributed network of such centres in the nearby districts of Providencia, Centro, Jardines del Bosque, etc., with similar centres in the neighbouring cities of Zapopan, Tlaquepaque, Tonala, Tlajomulco y El Salto, we could plan a metropolitan region that overcomes the current Core-Suburbia model that currently exists (see Figure). 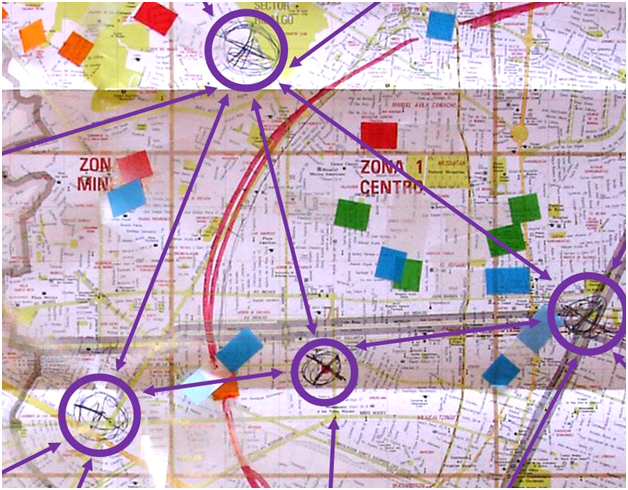 Figure: The concept of distributed complete communities applied to Guadalajara would help stop traffic congestion before it starts.

Car trips would decrease in duration and frequency, with daily commutes from the suburbs to distant office parks and shopping malls turning into short walks or efficient bus trips (at peak hours, commuters in Curitiba, Brazil, wait only 3 min. for a bus). Both traffic congestion and air quality would improve as a result, and with such smart planning, so would our quality of lives.

This last week I found myself strangely comforted at the sight of a group of military take-over of a narcotraficante (drug trafficker) home not far from mine in Guadalajara. These signs of action that follow so many years of frustration and bitterness in the public psyche seemed like a distant dream not long ago. This shift in policy, and more importantly, its resulting implementation on the ground, suggest to me that there are other far less confrontational cultural and institutional shifts on the horizon that we can also begin to collectively focus on: planning our sustainable future.