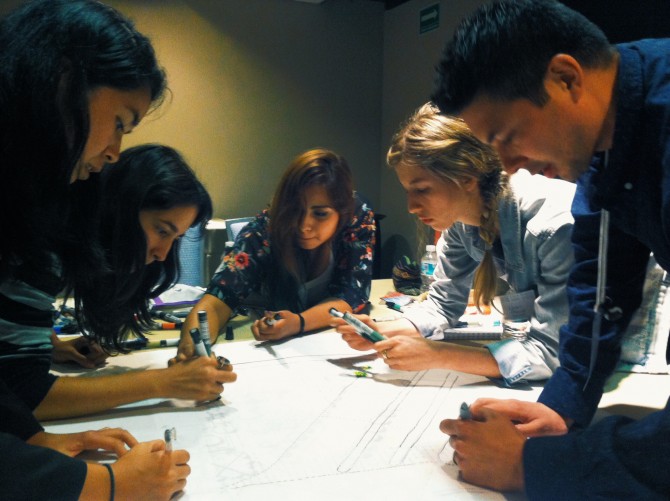 Building on the legacy of the Canadian Society of Landscape Architects (CSLA) congress charrette in Cuba in 2007, the 2015 congress organizing committee wanted to continue the tradition of conducting a design charrette on a local site in Mexico City. After discussions with a representative of the Mexican Society of Landscape Architects (SAPM), the organizing committee was put in touch with several professors at UNAM, Mexico’s largest university. There was great interest in coordinating a charrette with involvement from Canadian and Mexican professionals, as well as students from UNAM’s undergraduate landscape architecture program.

The selected site was a public plaza alongside the Church of San Judeas Tadeo, near the convent of San Hipólito, located on Reforma Avenue at Avenida Hidalgo. This is just a short walk from the congress hotel in the colonia guerrero, as well as some of Mexico City’s most important cultural institutions- including The Palacio de Bellas Artes and Museo Nacional De Arte. Reforma itself was modeled after the grand avenues of Europe such as the Champs Élyées in Paris and the Ringstrasse in Vienna.

The local community originally approached the faculty at UNAM about the design and planning of a public plaza that is currently poorly organized and heavily used. The university’s social services program in Mexico has already been doing groundwork on the site, and described how they could benefit from the contributions of landscape architects. Drawings and other design products generated during the charrette would be handed over to the social services program to provide a vision and aid in the implementation of new projects for the site. 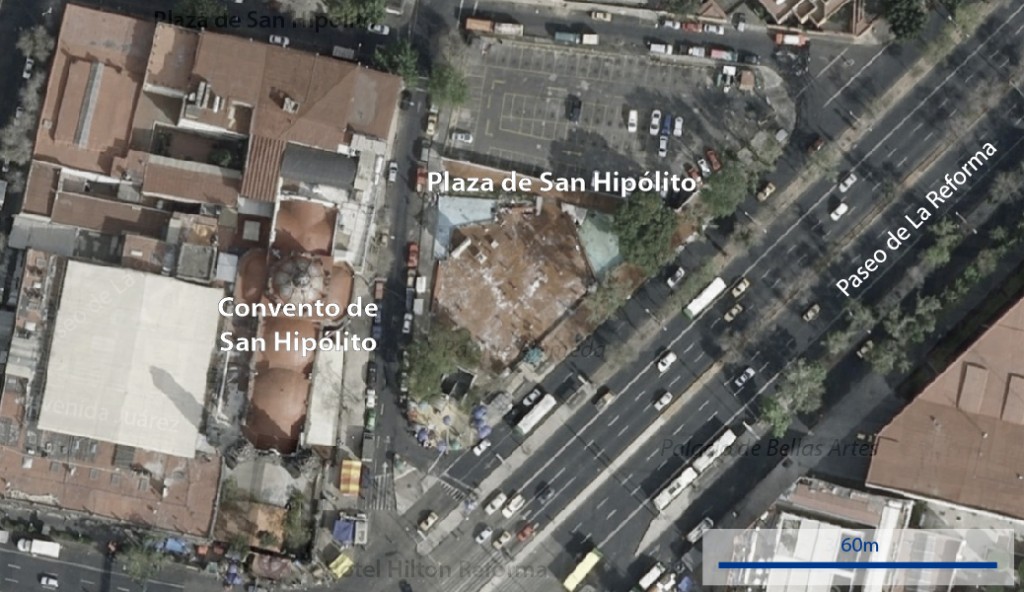 San Hipólito is an important historic, religious and cultural site, residing on Avenida Hidalgo, which is part of the ancient structure of Tenochtitlan- the original Aztec city that Mexico City was built upon. The construction of the major avenue Paseo de La Reforma in the late 19th century severed the plaza from the adjacent Alameda Park. Site activities and amenities have never fully adapted to this limited space. San Hipólito has considerable potential to continue growing as a destination for visitors and local commerce. 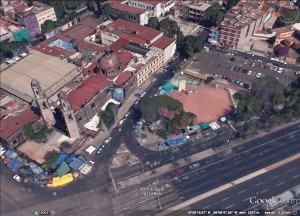 The church is a prominent cultural site with regular monthly and annual patron saint celebrations, which can bring crowds of tens of thousands of people in addition to every-day local commerce. Pilgrims congregate around the front of the church to enter, reach the altar, and then exit out the back. 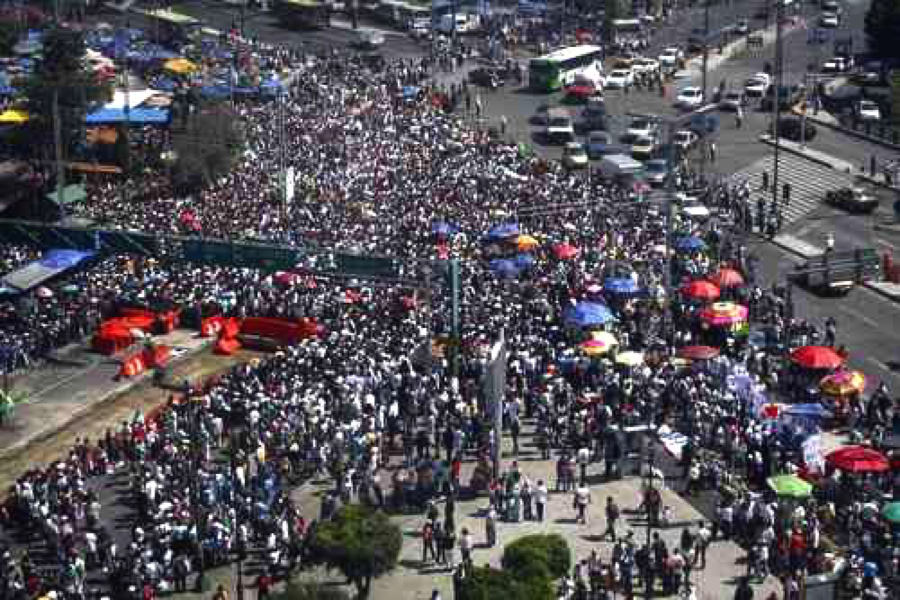 In addition to its relevance to culture and heritage themes, this plaza is relevant for exploring other facets of livable cities: active transportation, human infrastructure, strong local commerce and envisioning the process of urban renewal within a marginalized population. Basic infrastructure and facilities for formal and informal commerce are needed, and the site is on a major transportation corridor with a bike lane, bus route and an important metro station that haven’t been properly integrated into the site.

The following design objectives were established over a series of video conference calls between congress organizers, UNAM faculty and students, and a representative of UNAM’s social services program.

Interest in the charrette quickly grew to almost 30 participants, with equal numbers from Canada and Mexico, and several international attendees. A site visit was conducted on one afternoon during the congress, and the charrette unfolded in a fast-paced 4-hour event the following afternoon. Several community members and local merchants as well as a representative of the national services program all joined the charrette team for both days.

The site visit was an opportunity to bring the visiting Canadian landscape architects up to speed on the local site, its current use, its surrounding historic buildings, and hear from local students who very familiar with the plaza and some of its challenges. During the site visit it was noted that the plaza benefited from several very large existing trees, significant, though fragmented open space, a rich variety of potential destinations in its surroundings, and a very central metro station. Over the decades the site had become congested not only with vendors and people, but also by piece-meal architectural additions, non-functioning water-features, art-installations and the plaza itself had been sunken down half a meter. 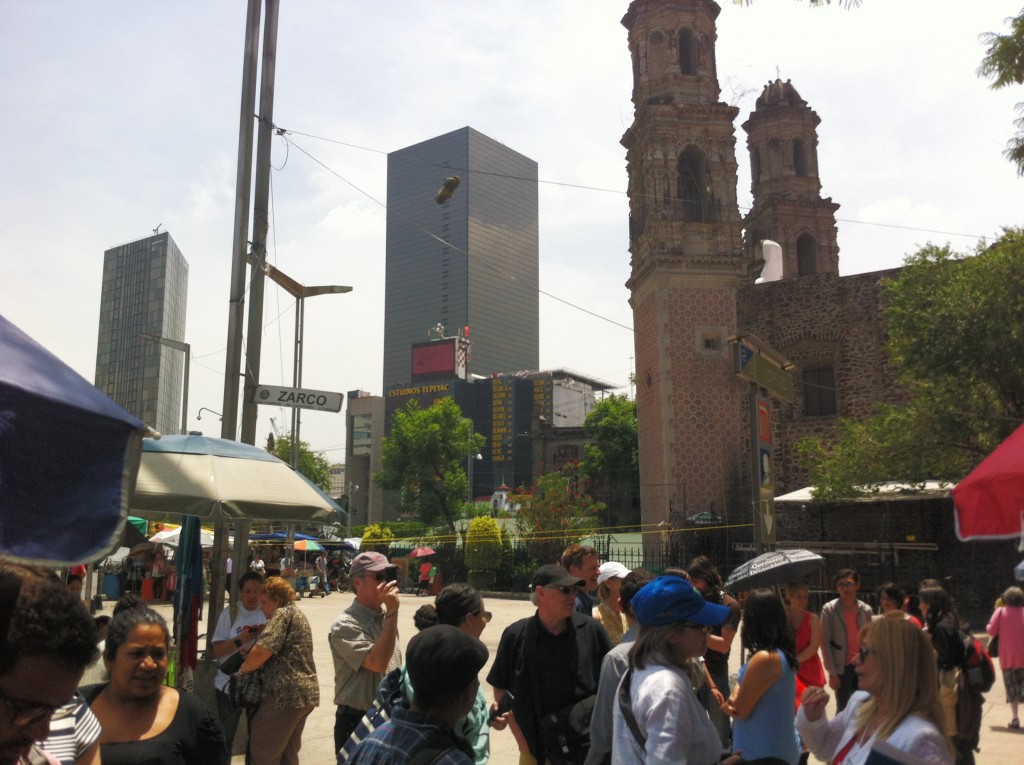 Site visit to plaza Zarco, with the Church of Saint Judeas Tadeo in the background

Upon re-grouping at the end of the site visit, the charrette team discussed directions for charrette event and three relevant scales of study were identified:

The team organized themselves into three groups of 8-10 people around based on these spatial scales.

As the team conducted a fascinating site visit guided by UNAM participants, it was noted that many surrounding streets were named after notable figures in Mexican history, including Zaragoza, Guerrero, Moctezuma, and a street named aptly named “Heroes”. A nearby cemetery housed the grave of Benito Juarez, liberal Mexican president from the 19th century responsible for modernizing the country. The first modern primary school in Mexico, a national music school and numerous other cultural destinations were distributed within just a couple of blocks of plaza Zarco. The concept of recognizing the neighbourhood as a whole was clear, and the descriptive designation of a Heroes District emerged.

A unique identity for this district would evolve while drawing on the already well-established nearby tourist destinations such as Alameda Park. The team diagrammed concepts for improving site and neighbourhood permeability, using visual cues such as trees and soft lighting to draw visitors down the major circulation spines that link together these cultural attractions.

The temporal scales of the use of the plaza became a central consideration. The site had to function for all users that could expand during times of monthly and annual gatherings, yet be flexible enough to contract into a series of smaller, more functional spaces for daily lower volume use.

Working on complementary schemes, these teams decided that in order to move local commerce and vendors away from the front of the church, towards the back, north end of the plaza so it would open up the church entry and front-side of the plaza. The north end of the plaza offered considerably more space for a market, including an overflow parking lot during times of peak use and the number of vendors increases dramatically. In order to make this plausible, several “big moves” were explored.

First, the Hidalgo metro stop entrance was re-oriented away from the front of the church and towards the north end of the plaza. This would channel people into the preferred area for vendors. With the addition of other basic human infrastructure like bathrooms, water, electrical outlets, shade trees and rain cover, seating and eating areas, the north end of the plaza could become a desirable locations for vendors to set up and a thriving market for visitors, while opening up the front of the church.

The second big move was to move the traffic lights from there current location in front of the church at the intersection of Reforma and Hidalgo, northwards up Reforma. This would open up and widen the larger “front door” of the church and help to claim this intersection space during times of peak use. This move had the secondary critical benefit of shifting the crosswalk that stretches across Reforma northwards along with the traffic lights, towards the mid-point of the plaza. This not only shortened the crossing for pedestrians but also more closely connected it to the newly located metro entrance. Also to improve connectivity, access and circulation, a flat ground plane was re-introduced across the entire site. These interventions all worked together to channel visitors towards a renewed market area in the north end of the plaza.

A notable design detail for the plaza included a dry fountain with water jets that would not only bring the space alive while keeping it completely open and uncluttered, but also providing a disincentive for informal vendors to set up there in the middle of this open space. 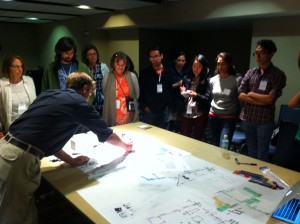 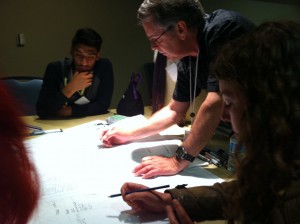 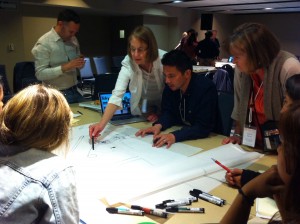 This event demonstrated the efficacy of bring together local expertise with a diverse group of young and senior designers for an intense, productive charrette event to address complex urban problems. Although we can’t solve all of the challenges facing this site in one afternoon, we can and were able to provide an exciting vision for a greener urban future for this part of the city through real collaboration. Participants found this exercise uniquely challenging and extremely rewarding and the many benefits of the CSLA demonstrating this kind of leadership are far-reaching. Judging by the notable buzz throughout the congress after the event, there will no doubt be interest in carrying on this legacy of international landscape architects collaborating for local causes at future congresses. See you in 2016!